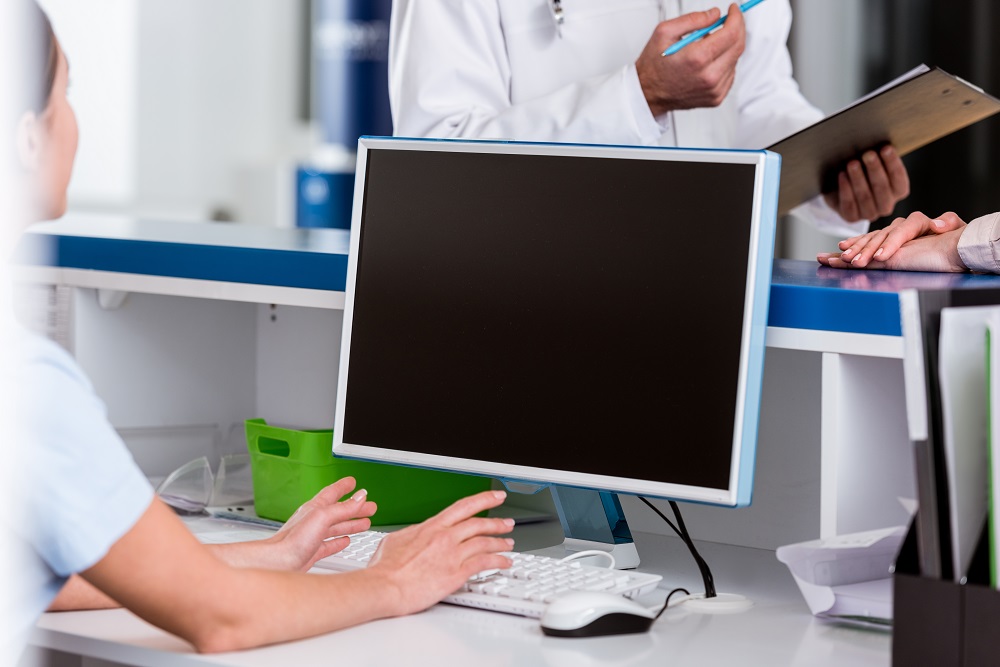 In this interview we catch up with Stuart – who has experience of working as a practice manager and receptionist – to hear his thoughts on how the relationship between the two can be smooth sailing.

Stuart perhaps wasn’t your typical practice manager. Rather than working through the ranks of primary care or elsewhere in the NHS, he entered the world of practice management from a background in manufacturing.

“It all happened by accident really. The company I worked for was on the verge of closing and the practice right next door happened to be advertising for a practice manager at the same time. I applied for and got the job, which was a bit of a bit of a shock, to be honest,” says Stuart, who remained in the role for the next five years before retiring from full time employment.

After a few months of retirement, the local practice was advertising for a bank receptionist which he thought would make an interesting diversion to retirement and, being bank, would offer a degree of flexibility.

Here are Stuart’s thoughts on the roles and how the relationship between PMs and receptionists can be smooth sailing.

Recognising that reception work is complex…

“When I entered practice management, I just didn’t understand much at all about the job other than that which I had Googled prior to my interview.

“I’d read a few articles and picked up enough during the interview process, but much of it was like a foreign language. Scripts? Not a clue! All the NHS acronyms? Not a clue! There were so many technicalities to pick up quickly. I was fortunate to have had a short handover with the retiring Practice Manager, and also a lot of help from the local PM group.

“In my manufacturing life, I was fortunate enough to work in pretty much every department that was going throughout the course of my career, so I had a really good handle on how every department functions and what it’s supposed to do.

“As a PM I thought I should have understood the role of the receptionist better if I had been able to spend time on the front line. But the demands of the PM role meant I never got the chance to experience this first hand.

“While I regret the fact that I never got to spend enough time in reception, with practice management being what it is, I was struck by the sheer level of complexity involved in the reception role. Not so much with regards to tasks and protocols, but in the variation involved. You’re dealing with people rather than processes, and everybody is different – you don’t know what you’ll need to deal with when you pick up the phone.

“Practice managers who have not come up through the ranks need to be aware of this and respond accordingly by being empathetic and supportive.”

You’re very, very much dependent on the quality of people you employ…

“Regardless of how many protocols you write, the reality is you can’t cover all eventualities because there’s just too much variety. So, the calibre of receptionist is pretty much everything and it’s not a role that everybody is suited to.

“When I joined my practice as manager, a receptionist was recruited at the same time. She was positive, friendly and helpful, but after two months, she just packed it in because she couldn’t handle it, as she was very nervous about giving people the wrong information.

“Personalities do play a key part, probably more so than a lot of other industries I’ve worked in where you can be more process driven. Particularly manufacturing, where you have machines that are predictable in the way they operate. You could write instructions and generally things work to plan, whereas in practice management and reception, you can’t plan for what you don’t know is going to happen.”

Receptionists are only as good as their protocols…

“Where I work now, I’m lucky that we have a telephone triage system in place that puts the onus onto the clinicians to make the key decisions and ascertain priorities. If I had to make decisions on who to book on an emergency appointment or not, I don’t think I’d be there anymore.

“The job does get easier with experience and the only way you get experience is doing the job. Stay in the role long enough and you’ll probably learn how to handle 80 or 90% of all the questions.

“Again, I’m lucky in that our practice has a couple of advanced nurse practitioners who are more available than the GP’s and are incredibly flexible and helpful and are always prepared to go the extra mile to fit somebody in. I can go and see them or send them a message and they’re on the case. I find that really useful.

“Processes also need to be understood and work across the organisation. When I was practice manager, we would occasionally have a bit of conflict between the GPs and receptionists, which was just down to personalities.

“The GPs had an idea of how they expected everybody to work, but sometimes I don’t really think they understood the complexity and pressures at reception. I think they perceived it was straightforward and they couldn’t understand when the receptionist would make could make a simple mistake. That’s a shame because, at the end of the day, everybody’s there for the same purpose…the patients.”

“I was lucky in that I never had a problem receptionist in terms of ability or attitude, so I trusted the team 100% and the job they were doing. Trust is vital in an environment where you can’t have a protocol for every eventuality. You can have some general guidelines, but the real issue is about communication, trust and a high degree of common sense.

“One thing I’ve always been conscious of in both practice management and previous jobs is the need to talk to people regularly. I think it’s very easy as a practice manager to get yourself locked in your office and embroiled in the tons of crap that you must do. But you do need to take time out on a regular basis and talk to staff. If problems are brewing it’s much better to pick them up early, before they fester. Again, because of the variety of reception work things can go from peace and serenity to Bedlam in a matter of minutes.”

“Another recommendation is to create more receptionist capacity than you need at any one point in time, (which I know is difficult). When a receptionist hands in their notice, by the time you’ve advertised, interviewed and got the person in, trained them up and trust them enough to do the job on their own, the old member of staff is already long gone.

“I would certainly look to employ bank staff as an option. There’s a lot of negativity around zero hours contracts, but personally I love mine because it provides a high degree of flexibility for both parties. OK, it might not work for everyone, but my point is that practice managers need to think creativity and be flexible about staffing.

“There’s pretty much always someone on holiday, or long-term sick leave, so it makes sense to have that extra bit of reception cover up your sleeve.

“Another option here is to work together with other local practices to share staff as and when needed.”

And finally, what skills and personality make an ideal receptionist…?

“The only way to train a receptionist is to put them with another good receptionist for a prolonged period, let them listen to the phone calls. That said, you still need people with the right skills – and more importantly, the right personality.

“I was lucky. I always dreaded the recruitment of a receptionist without the relevant experience as I was aware of how long the training process would be and the amount of resources this takes. However I only had to recruit four or five receptionists, and luckily (for me), each of them had already worked as a medical receptionist elsewhere, which made life so much easier.

(I know you can’t recruit based on this, but it’s worth noting they were also more mature, so could handle people and the demands thrown at them better – life experience counts for a lot).

“You are looking at a certain type of individual to be a receptionist. I think it’s difficult to exactly describe that person but overall, you need someone who’s capable of handling a few life experiences, somebody who’s a bit robust, friendly, trustworthy, and able to pick up the IT side of the system as well, although that is something that can be taught.

“I think it is a good idea to offer any potential candidates an experience day in the practice on reception. I am sure a lot of applicants think it’s just booking appointments, so to spend time in reception for a day and see the variety of things that can happen provides a useful insight.

“I also maintain my own list of unexpected things that happen and what the protocol is for that particular event. This builds into a useful reminders library for when/if they happen again. (This normally gets things added to it on a daily basis!).

“Above all else though – and you can see a theme here – it really comes down to how they can handle those unusual situations that do crop up. Sometimes, there are questions that not even practice managers know the answers to!”