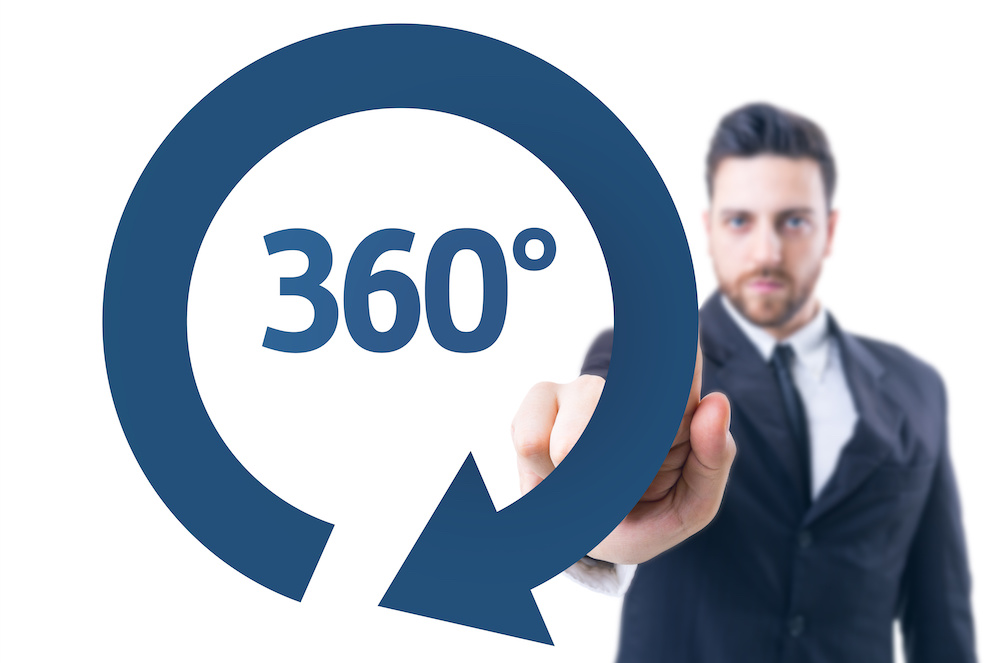 A topic that’s been popping up on the forums recently is what the ideal practice manager appraisal looks like. A number of contributors – myself included – have recommended 360-degree appraisals, and some have even recommended that partners should undergo the same process!

So what is a 360-degree appraisal?

Rather than a standard appraisal where the feedback to the individual comes solely from the appraiser (usually one’s direct line manager, but for PMs this could be the senior partner, more than one partner, or an “allocated” partner), 360 feedback comes from a variety of sources. Usually it will involve feedback not only from the employee’s superiors, but also from their subordinates, their peers and sometimes even shareholders, stakeholders or “clients”.

The process would either involve the appraiser meeting individually with the respondents to gather feedback, or the appraiser may ask them to complete a questionnaire. All responses are treated anonymously so the appraisee doesn’t know who’s said what. This enables staff to be more honest in their feedback.

What are the disadvantages of 360 appraisals?

There are very few disadvantages – unless you’re an incredibly sensitive person who doesn’t take criticism well, in which case you might find it a terrible approach!

The experience may not be a positive one if the right method isn’t followed. So, for example, if anonymity isn’t maintained – or the respondents don’t have faith it will be – then they’re less likely to be honest and the appraisee isn’t going to get a real assessment of their performance from the point of view of their colleagues.

Your behaviour as the appraisee is also important; if you know you’re due your appraisal and you spend the weeks prior to the questionnaires being given out buttering everyone up, people will notice and they’ll see it as an attempt to influence the outcome. You must act with integrity.

What are the advantages of 360 appraisals?

You get a much broader perspective through “360” than just the opinion and feedback of one person. This can often result in a more honest assessment of your overall performance and can highlight areas where you’re excelling or areas that need improving which you weren’t aware of previously. It can also give the appraiser a different insight into your impact – for example, they might think you’re doing okay, but your respondents might say you’re superb!

It gives your staff confidence that you care what they think and value their feedback. Showing yourself to be approachable, reflective, able to take criticism and willing to learn will benefit your relationship with colleagues immensely and help influence the culture you want to create in your organisation.

It’s much more objective; if the feedback given demonstrates a particular theme (e.g. Don has a great sense of humour) but comes from a variety of sources at different levels of the organisation, you can pretty much guarantee its accuracy.

The positive impact, however, will only last if you’re seen to follow through on what’s been raised, and that you continue to repeat the process. If you don’t act on any of the negatives – or aren’t seen to have recognised them – then the process and your integrity can be undermined. Similarly, if you only do it once and the next year revert to a traditional appraisal, again your integrity and the process can be undermined. “360” is a commitment you need to stick to.

Who should I ask to participate?

Technically you shouldn’t ask anyone. For a completely objective appraisal, your appraiser should pick who to seek feedback from. You can provide them with a list of the people you professionally interact with, but ideally they should choose who to involve.

What sort of questions should I ask?

As mentioned above, questions need to be meaningful and based on the individual’s performance. It can be helpful to include some questions with a rating scale – especially if the individual is very target driven – as this can give the appraiser a mechanism for measuring improvement. However, it’s also good to have some open questions which encourage the respondent to discuss their opinions in more detail.

You also need to consider your audience; if you’re giving the questionnaires to lower-level staff, you don’t want to put them off by using lots of jargon or corporate buzz words. Keep it clear and concise so everyone feels comfortable responding.

Here are some examples:

How did I find the experience?

I had my first 360 appraisal in October, after being in post for a year. I insisted on doing a “360” as I was keen to know how I was doing not only in the eyes of my partners, but all my staff. We have 26 other staff at my practice and 3 partners, one of whom carried out my appraisal. She gave questionnaires to 10 staff members and had 9 responses.

The feedback was (thankfully!) overwhelmingly positive but there were areas for improvement highlighted by some respondents which, ironically, I’d pointed out myself in my pre-appraisal questionnaire.

The main issue brought up was that my enthusiasm for making improvements often made people feel a bit nervous about change or – in the worst-case scenarios – a little left out of what was going on. In my pre-appraisal questionnaire, when discussing what I thought I could improve, I’d written in big letters “SLOW DOWN!” It was nice to know I knew myself well and to be able to identify something I could work on.

My priorities for this year are to achieve some stability in the team (we had a few retirements last year), to let some of the new initiatives we’ve introduced embed and review their efficacy, and to keep channels open for staff feedback outside the appraisal process.

My advice to anyone going through it is this:

Topics trending in the forum:
Have I done the right thing?
Am I in the right job?
Receptionist hourly rate
PI News: FREE mental health in the workplace course – Time to Talk Day