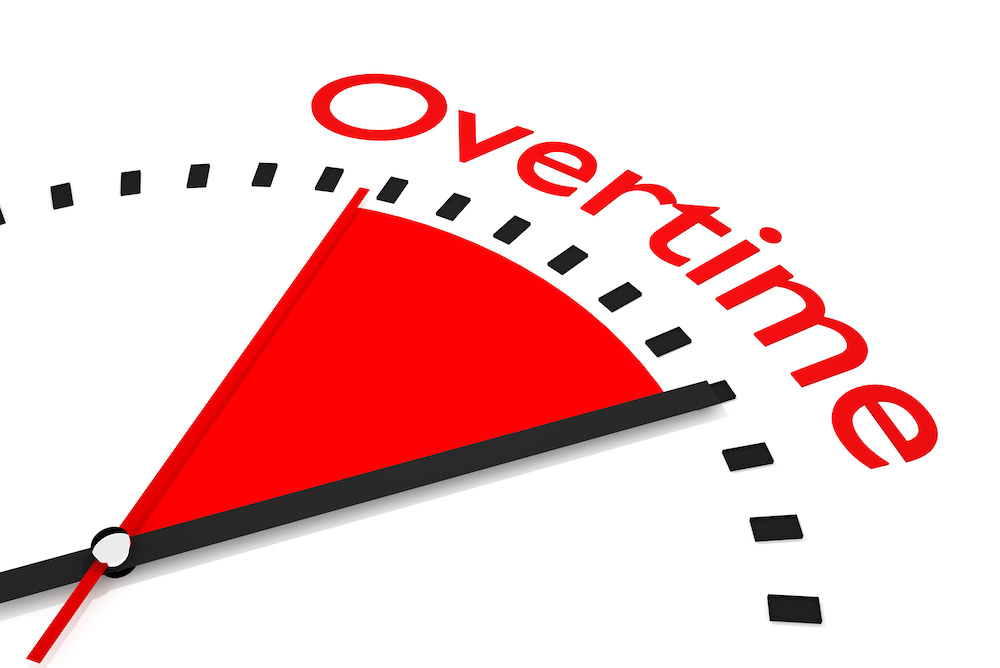 Recently on the Practice Index Blog we looked at the gender pay gap that exists among Practice Managers. Following on from that, using figures obtained from that survey, we take a look at the thorny topic of overtime.

While the Gender Pay Gap Survey highlighted some interesting findings, it also threw up an interesting, potentially costly, probably annoying and thoroughly large downside to the work that we do – that’s the fact there’s far too much unpaid overtime being put in.

That probably doesn’t come as any surprise to you – and it’s a trend that anecdotal evidence suggests is getting worse – proving that the level of commitment of Practice Managers is well beyond the call of duty.

Overtime is a problem across the board too – as our breakdown of the results highlights:

Drilling down into the survey results more deeply, there were 23 Practice Managers contracted to work a 40-hour week. In this group, the average list size was 10,375 patients and the average salary was £44,460 pa. The average number of staff employed was 33. However, the Practice Managers on average submitted that they actually worked 46 hours per week, an 6 hours extra. Average overtime per week: 6 hours

Prior to the NHS Agenda for Change pay system, before 2005, the standard working week in the NHS was 37 hours per week (a curious 7 hours 24 minutes per day). Today, 132 Practice Managers from our survey are working these hours. Their average practice list size is 10,373 patients and the average salary is £40,701. In these practices the average number of staff is 29. However, the Practice Managers said they actually worked on average 44 hours per week, equivalent to an extra working day or 7 hours. Can you see that a striking pattern is beginning to develop? Average overtime per week: 7 hours

A 35-hour week equates to a straight 7-hour day. 35 respondents were contracted to work these hours and the average practice list size in this group was 8,000 patients and the average salary £36,484. An average of 20 staff were employed. However, as in larger practices, these Practice Managers maintained that they actually worked over 41 hours per week, which again equates to almost 7 hours, extra.  There must be a strong argument that the work of Practice Managers has a common core to it, and although practices are of different sizes, all managers still have to do the ‘same’ or a similar job but the scale might be different. Average overtime per week: 7 hours

A 30-hour week equates to a 6-hour day, although some managers might work a four-day week. The average list size in this group is 6,804 patients and the average Practice Manager salary is £31,478 pa. Practices may employ an average of 20 staff. In this group, managers are working an average 5 hours extra per week. Average overtime per week: 5 hours

There are 35 Managers in this final group, with an average Practice list of 6,144 patients. The average salary is £24,963. These practices employ an average of 16 staff. The average standard hours in this group was around 24, although the Practice Managers have stated that they work at least 30 hours per week. The pattern of a consistent extra days work per week does seem to be commonplace. Average overtime per week: 6 hours

It’s clear from the above that going the extra mile and putting in the hours is commonplace – the majority of managers, no matter their gender, list size or salary work the equivalent of an extra day beyond their contracted hours. But what do we know about payment for that overtime; are Practice Managers being remunerated for working that extra time or day?

The Gender Pay Gap Survey didn’t ask the question, so a poll was placed on the Practice Index Forum. The results make for really interesting reading – and can be viewed here.

Of interest is the number of PMs who can take time off in lieu – which in many ways just adds insult to injury. It must also be said though that a bonus is not a payment for overtime. A bonus would normally be associated with either a business achievement or a personal achievement resulting in a profit. Another point to add in is that Practice Managers who are not paid NHS pay scales in line with AFC Bands 8 (£40,248 at the time of writing) and above, can claim overtime.

It’s important to note that PMs aren’t alone in this seemingly unstoppable rise of overtime. According to a survey by OnePoll on behalf of the comparison website TotallyMoney, British employees work more than 10 hours overtime every week on average, clocking up 469 hours of extra work a year. Just under six in 10 of those workers will simply not get paid for those additional hours.

In addition, Research from the TUC shows that workers gave away more than £31bn worth of work last year. That extra, unpaid work was worth an average of £6,265 per employee, the trades union estimated.

All-in-all, while certainly not alone in putting in generous amounts of overtime, Practice Managers need to be aware of the hours they are working and press to ensure their salaries reflect the hours of work put in. After all, it’s only fair.

Are you paid overtime or is it just expected of you? Do you reward other practice staff? How do you reward them? Let us know by commenting below, or take it to the forum here.