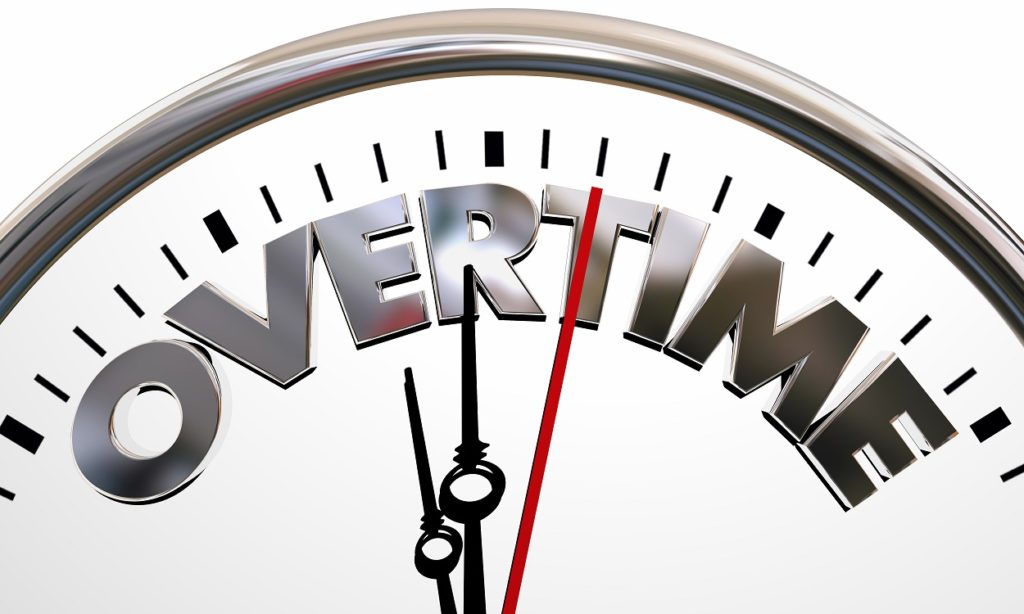 One of our most popular recent forum threads has been shedding light on the thorny issue of hours and overtime. With a seemingly endless list of to-do items, a practice manager’s job is never done – and many are bearing the brunt of this by working hours far longer than their contracts stipulate.

Working overtime is one thing. Working overtime and not receiving extra pay, however, is another. Worryingly, one of our polls conducted back in March 2018 found that 42% of Practice Managers aren’t paid for any overtime that they work.

And it’s not as if working past contracted hours is the rarity. Our respondents almost unanimously stated that they do indeed work overtime – some even told us that they work an extra fifteen hours per week (on top of their 35 contract hours) which is a whopping 43% extra.

Fortunately, this isn’t the norm, though the reality isn’t all that much better. Back in April 2018, our survey of 528 practices showed that practice managers worked on average an extra 6.5 hours per week (which almost equates to an entire extra day).

Are we asking too much of our practice managers? One forum participant summed it up succinctly, saying, “Your to-do pile will never be empty no matter how many hours you work –  it’s the very nature of the job”.

By working for the NHS, practice managers have a duty of care, which makes it incredibly difficult to simply ‘clock-in and clock-out’. Sure, it might help to have some assistance, but very few of our forum respondents said that they receive any extra help.

Even if they do, the very nature of the job – daily firefighting and constant rushing around to get things done – mean that there often aren’t enough hours in the day to adequately train up their support team.

That being said, the NHS has provided some measures aimed at combatting constant overtime. For example, you can always take “time off in lieu” (TOIL) – can’t you?

The concept sounds great in theory; if you work overtime, you can then take this time off at a later date. However, does it actually work?

“TOIL is a nice idea but I can’t get the work done in the hours as it is so I can never find time to take any”.

If you’re struggling with your workload then taking time off is barely going to help. It will of course help with your mental wellbeing – though maybe only temporarily, as when you do get back into work your to-do list will be just as big (if not even bigger) than when you left.

And this is without touching upon the genuine, contracted time off that practice managers are afforded. There are questions about whether or not this is long enough – for example, one respondent stated that he regularly works 45 hours per week but only receives 5 weeks’ annual leave per year.

This isn’t sustainable. Practice managers are working themselves into the ground, often causing illness and burnout, all because they’re being asked to work overtime for no remuneration, not getting the support they need, or being pressured by partners into working evenings and weekends.

So, the question is: how can practice managers enforce a widespread cultural change in the NHS?

Fortunately, the NHS seems to be slowly adopting the wider societal trend of allowing increased working from home benefits. Whilst this still requires practice managers to be working, having the freedom and flexibility to get on with your tasks from the confines of your own home helps allay the stress of feeling like you spend your entire life in the office.

With regards to the issue of overtime, it might help to know that practice managers aren’t necessarily alone. We’ve previously reported that, according to a survey by OnePoll, “British employees work more than 10 hours overtime every week on average, clocking up 469 hours of extra work a year. Just under six in 10 of those workers will simply not get paid for those additional hours.”

So, is the issue working overtime or not being paid for it? Both. However, unless additional NHS resources suddenly materialise, Practice Managers aren’t going to find their workload decreasing any time soon. In light of this, we strongly advocate logging your overtime hours and using this as the basis for discussing a pay rise.

Working excessive hours without compensation shouldn’t simply be seen as part of the job. Don’t stand for it any longer.

Handy:
Holiday overtime pay calculator [PLUS]
Time off in lieu and overtime policy [PLUS]

NEWS: Patients waiting for pledge to speed up GP appointments