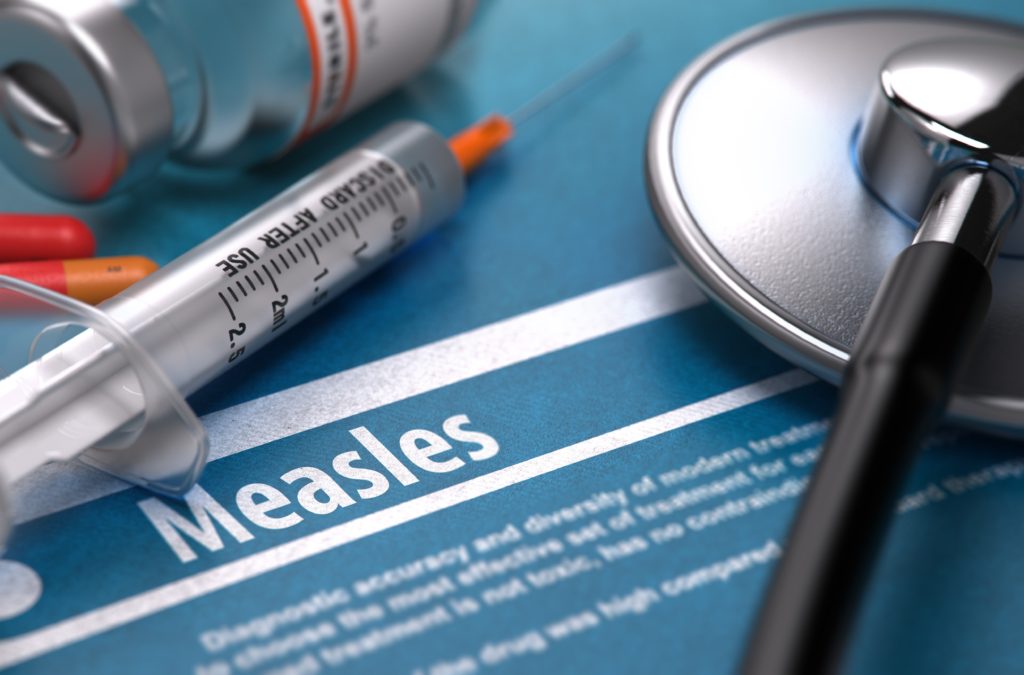 It has been announced recently that the World Health Organisation (WHO) has revoked the UK’s status as being “free from measles” following a rising number of reported cases and a decline in the number of children receiving the Mumps, Measles and Rubella vaccination (MMR)*

Although the virus was previously eliminated in 2016, there has been a consistent rise in cases, culminating in 231 confirmed cases of measles recorded in the first quarter of this year. Statistics show that only 87.2% of children are being given the second dose of the vaccination, a sharp decline from the 88.6% recorded in 2015**. It is only above a 95% vaccination rate that we can protect those who cannot be immunised for health reasons, through what is known as ‘herd immunity’ – i.e. preventing the spread of a contagious disease by having a sufficiently high number of people immune to, or immunised against, the disease.

As you are no doubt aware, the complications of contracting measles can be devastating. In the past couple of years, there has been a significant rise in the number of “anti-vaxxers” campaigning though social media, referencing the now discredited Lancet paper by Andrew Wakefield which linked the vaccine with autism. This is thought to have contributed to this current crisis, in addition to a general lack of awareness and a sense of complacency, according to WHO*. Worldwide confirmed cases of measles have soared to their highest rate since 2006, with other countries taking drastic steps to improve their compliance rates. This summer, the measles vaccination was made mandatory for children entering school or kindergarten in Germany. Parents will face fines of up to 2,500 euros if they fail to carry out these immunisations***.

Prime Minister Boris Johnson has announced that urgent action is being taken to ensure that all health leaders are striving to meet a 95% coverage of the population. Among the initiatives will be a communication programme from NHS England focusing on “catch-up” immunisations to include 10 to 11 year-olds, in addition to all 5 to 25 year-olds who have not received both doses. They will also task local immunisation coordinators to work with practices to increase uptake, focusing on hard-to-reach families.

This coming autumn, the Department for Health and Social Care will announce a strategy to improve vaccination rates. However, in the meantime, we are ideally placed in general practice to start making progress by informing patients about the risks of measles and encouraging our patients to book immunisations. These are some of the things you can do:

Is your child starting school this September? Make sure they have had their immunisation before they start. It’s so easy book online, or call our practice on XXXX

Forgotten to get your child immunised? Simply book an appointment with the nurse and we will get you up to date!

Measles can cause severe complications – don’t risk your child’s health or the health of others. Book an appointment with the nurse today: https://www.nhs.uk/conditions/measles/

Cases of measles are three times higher than last year. Don’t miss your immunisation (retweet this post from @WHO https://publish.twitter.com/?query=https%3A%2F%2Ftwitter.com%2FWHO%2Fstatus%2F1160918151569334273&widget=Tweet

Is your child starting school soon? Make sure they have had their immunisations. Simply call us on XXXXX to book an appointment.

Complications from measles can cause lasting problems. Don’t risk your child’s health; book an appointment with our nurse today.

Towards the end of the year, there will be a campaign, aimed at general practice, from NHS England, Public Health England and through GP practice, called “Value of Vaccines”, but the details of this are as yet unknown. Until this time, as a point of contact for parents of young children, practices have a great opportunity and an important responsibility to work towards creating change.

One Response to “Challenging the measles crisis”
Leave a Reply